"Our ambition is to apply the method to humans in the foreseeable future," says Greta Hultqvist, researcher at Uppsala University, who with a new protein transporter has succeeded in stopping and reversing the development of Alzheimer's disease in mice.

114 years after the German psychiatrist Alois Alzheimer first described the dementia disease that bears his name, healthcare still lacks an effective treatment. The antibodies that have so far reached clinical trials do not seem to stop the smallest aggregates to occur when the amyloid beta peptide forms lumps in the brain - the first step in Alzheimer's disease. Now Greta Hultqvist, researcher in protein drug design, raises new hope with the launch of a method that breaks down even the smallest building parts before aggregation has even begun.

“The peptide hormone somatostatin, which activates the body's degradation of amyloid beta, has not been useable for treatments before. Partly because it disappears from the blood in a few minutes, partly because it lacks the ability to force the blood-brain barrier. Our group has now developed a protein that, in studies on mice, transports the somatostatin into the brain where it also remains active for several days, which are fantastic results,” says Greta Hultqvist at Uppsala University's Faculty of Pharmacy.

After five days of treatment, a 25 percent reduction of toxic aggregates was measured - including the smallest amyloid beta clumps which are generally considered to cause the most damage. The most obvious effect was found in the hippocampus, the part of the brain that creates memories and is first to be attacked during Alzheimer's disease. Now, the group is preparing a month-long treatment that is also expected to provide answers to how the immune system and memory function respond to the therapy.

“Somatostatin works in the same way in humans as in mice, but before we take the step over to humans, we must modify our protein transporter. We still have a bit to go here, but work is in progress and our preliminary results look very promising,” says Greta Hultqvist.

Worldwide, an estimated 44 million people are living with Alzheimer's disease. With Finland being most severely affected, Sweden is in seventeenth place with just over 110,000 diagnosed cases. Globally, neurodegenerative diseases are currently the fastest growing cause of death, and the need for an effective treatment is acute. Thus, interest in the group's progress has been extensive since the study was first published in October 2020.

“The fact that the effect is concentrated in the hippocampus in particular indicates that the method will have a specific outcome with few adverse effects, which has been a major challenge in previous studies. When we presented our results at a scientific conference, the response was astounding. We are also receiving broad international media attention, which of course inspires. We will now continue our work hoping to, in the foreseeable future, lay the foundation for a treatment that both stops and reverses the development of Alzheimer's disease,” says Greta Hultqvist. 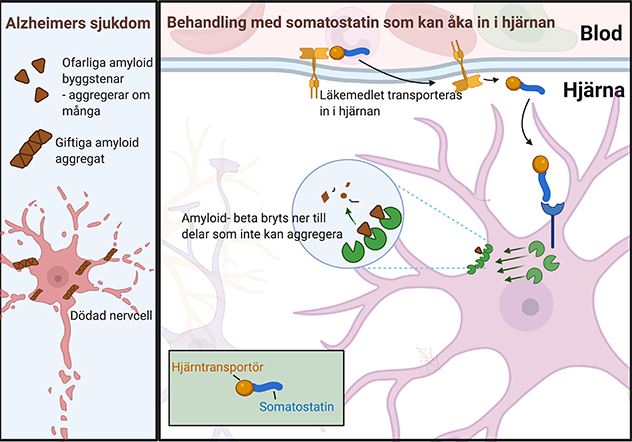 • Alzheimer’s disease is named after Alois Alzheimer, a German psychiatrist and neuropathologist, who in 1906 became the first in the world to describe the disease.
• In Alzheimer's disease, the protein amyloid beta clumps together in aggregates that damage the brain's nerve cells.
• Damage to a sufficient number of brain cells causes impaired memory.