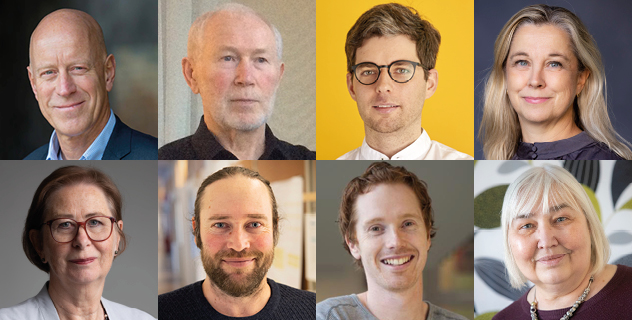 Per Andrén, Professor of Mass Spectrometry Imaging, is awarded SEK 3.6 million distributed over 2023-2026 for his project Exploration of neurochemical changes associated with L-DOPA-induced dyskinesia in Parkinson´s disease by mass spectrometry imaging.

Per Andrén heads of one of the world's leading facilities for Mass Spectrometry Imaging that in 2021 was recruited to SciLifeLab's national resource Spatial Omics.Professor Andrén is also director of a research group that recently published new findings on the adverse effects of L-Dopa therapy of Parkinson's disease.

“Dogma in neurology states that each cerebral hemisphere is functionally connected to the contralateral side of the body through the decussating neural tracts. We develop a novel concept that the contralateral effects of brain lesions are mediated through the humoral pathway by neurohormones that produce either the left or right side-specific effects," says Georgy Bakalkin.

“There is an urgent lack of effective and safe treatments for the neglected tropical disease leishmaniasis. That the Swedish Research Council chooses to finance our research on precision medicine tools for this poverty-related parasitic disease will contribute to better treatment options for these vulnerable patients and is a major boost for our newly initiated Pharmacometrics for Global Health research team,“ states Thomas Dorlo.

“Antibiotic resistance is one of the most common causes of death in the world and the prognosis remains bleak. To reverse this development, we must all work together, and earlier this year we began establishing a new interdisciplinary research environment, uniting four research groups at Uppsala University, Karolinska Institutet and Umeå University, and this grant is of course providing new opportunities and valuable inspiration to take on the important challenge we face,” says Lena Friberg.

"The Faculty of Pharmacy’s research environment for Translational PKPD is in a positive generational shift, and we recently arranged the successful conference Translating PKPD – (Retro)Perspectives that provided our junior researchers room to expand their international networks. The Swedish Research Council's grant gives me the opportunity to take part in this exciting development, but also to continue following a number of highly interesting research leads,” says Margareta Hammarlund-Udenaes.

Lindon Moodie, Associate Professor at the Department of Medicinal Chemistry and researcher with a focus on Organic chemistry, receives SEK 3.84 million over 2023-2026 for his project Nedbrytning av bakteriella målprotein.

“Our group is interested in identifying and developing anti-infective drugs.  Finding new antibiotics to counter antimicrobial resistance is a particular focus but its a tough challenge and conventional methods often fail. So sometimes its good to try some outside of the box strategies. One approach we are interested in is trying to trick bacteria into degrading their own essential proteins, and this funding from The Swedish Research Council will allow us to explore this,” states Lindon Moodie.

“With the development of a new class of chemical compounds, our research team has laid the foundation for Mass Spectrometric Imaging of the brain's neurotransmitters. This technique is currently used at universities and companies all over the world and is enabling important new discoveries. The Swedish Research Council's grant strengthens our resources to both develop new tools and to adjust our already existing compounds for new areas,” says Luke Odell.

"When a prostate tumor begins to spread, the metastases are initially so small that they are not visible on magnetic resonance imaging. Thus, we need a way to visualise every tumor before they grow too big. Our main clue is two trace elements, GRPR and PSMA, which are formed during the early stages of prostate cancer. Now, our team has developed a substance that binds specifically to GRPR, and by attaching radionuclide to the substance, the smallest metastases can be located to where a SPECT or PET camera indicates increased uptake of radioactivity. We have also developed a molecule that binds to both trace elements during all phases of the tumor, and if only one of our two leads proves successful, we hope to provide healthcare the tools needed to help all men suffering from prostate cancer to longer and better lives,” says Anna Orlova.