Antibiotic researchers of the future at Uppsala summer school

Antibiotic resistance, Innovations and Design Thinking were on the agenda when the Faculty of Pharmacy welcomed young researchers from six European universities to the TIPAT Summer School 2022. "Organizing an event like this generates great values," says Iris Minichmayr at the Department of Pharmacy.

In 2019, 1.3 million people are estimated to have died from infections caused by resistant bacteria. This makes antibiotic resistance one of the leading causes of death in the world, and in Uppsala a number of initiatives are currently being coordinated - among them ReAct, ENABLE-2 and Uppsala Antibiotic Center - in order to reverse the trend through interdisciplinary cooperation. In late August, Uppsala University also welcomed PhD students from six European universities to the TIPAT Summer School 2022 with a focus on antimicrobial resistance, innovation and entrepreneurship.

“The Faculty of Pharmacy is since two years engaged in a European network that prepare young researchers for a career in developing personalized antibiotic treatments. This late summer meeting provided a great opportunity to show what our own group is working on, but also introduce the participants to some of Uppsala's many strengths in the field of life science and antibiotics, and my impression is that our guests were very satisfied with their visit,” notes Lena Friberg, Professor of Pharmacokinetics and Pharmacodynamics.

The summer school offered three days of lectures and practical sessions with teachers from academia, industry and authorities. The fact that the pandemic more or less blocked all personal meetings throughout the network's first years contributed to the great emphasis placed on team building and social activities. A much-appreciated feature was also the workshop in Design Thinking led by the Entreprenörstiftelsen Drivhuset. 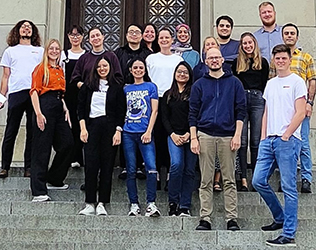 “The exercise in Design Thinking was extremely interesting and made us reflect on how we approach a problem. In fact, this entire summer school was very well planned and managed to cover a wide range of topics, yet still providing plenty of time for interaction with the teachers, but also between us younger researchers. I am very happy to have participated in this meeting,” says one of the PhD students at the TIPAT Summer School 2022.

In addition to Lena Friberg's research group, representatives from Uppsala University's Faculty of Medicine and Disciplinary Domain of Science and Technology, the Swedish Medical Products Agency and Drivhuset were on site at the Uppsala Biomedical Center. Björn Arvidsson, Managing Director at STUNS Life science, also made a guest appearance at the summer school providing the lecture Why innovation and entrepreneurship?

“Organizing an event of this kind generates great values on several levels. It strengthens the ties within our local networks, while providing our own PhD students space to step forward in an international context. Two of them are currently preparing stays at Roche and Paul Ehrlich Institute, and when TIPAT wraps in a couple of years, we hope to have established contacts for joint applications and scientific collaborations for a long time to come,” says Iris Minichmayr, researcher in Pharmacokinetics and Pharmacodynamics.